Channel is any single or multiple bitrate live video stream ingested over RTMP or UDP (unicast/multicast) protocol into Telia Media Services infrastructure, processed and packaged into HLS or MPEG-DASH stream. Channel may be a live TV channel transmitting 24 hours a day or event stream lasting only several hours. Channel originates in an encoder or streamer that generates video stream either provided by customer or purchased as a TV channel cloud playout service or received from satellite and converted into IP stream. Add, edit and manage channels in the Channels section.

Elementary streams and Manifests are parts of the channel configuration.

Elementary stream is the single video stream with supplemental audio and possibly subtitle or data streams. A channel can contain multiple elementary streams which can be combined into a manifest to create an adaptive multiple bitrate stream.

A manifest combines a set of elementary streams of the channel to form an adaptive multi-bitrate stream.

Channel ingest is a process of live video stream acquisition into the system. Live ingest point is where the stream enters the Telia Media Services infrastructure. The following channel ingest options are available:

Live transcoding process takes one video stream as an input and transcodes it into several renditions at different resolutions, bitrates and other parameters. Live transcoding service is not part of self service platform and may be provided upon request.

Recording is a special type of media asset generated by channel recording process. Content of the channel streams is stored in the system for later playback. Recordings can be managed in the Recordings section and used to create catch-up TV service, a library of live event recordings and other needs. Main features of recordings are:

Media or media asset is a set of files comprising a clip, movie, program or other video roll. Media asset can have one or more renditions or bitrates. Media asset may contain source video track, multiple transcoded video tracks, one or more audio tracks, e.g. in different languages, one or more subtitle tracks, metadata files, image files like posters, thumbnails etc. and any other related files stored with media asset. Media assets are managed in Media section and typically used for video-on-demand (VoD) type of services.

Media ingest is a process of technical acquisition of video assets into the system. For media assets it is an FTP server where content is uploaded or API function that automates the media asset files download/upload from customer's storage system.

Media transcoding process takes the source media asset files, creates a mux of video, audio and subtitle tracks and transcodes it into multiple renditions at different resolutions, bitrates and other parameters.

Transcoding presets are settings which define how media assets will be transcoded - number of renditions, bitrates, resolutions, framerates etc.

File in terms of Telia Media Services is any regular file uploaded into the Files section. Files can be delivered to large audiences over the internet, e.g. for software distribution and other needs. Files are managed in the Files section.

The Statistics section contains data from CDN usage metering system. As CDN sees only a part of the usage it is not feasible to extract user session data from that.

To maintain the client side statistics video player embed code is integrated with several statistics systems. Google Analytics is the default one but others can be obtained for additional cost. Client side statistics provided by Telia Video Cloud is not available if direct content URLs are used with 3rd party players.

Video API allows to automate the video workflow and integrate with other systems that customer uses for back- and frontoffice needs.

Streaming is a process of video delivery over the internet packaged into some streaming protocol like HLS or MPEG-DASH and played back by compatible player on the viewer's device, e.g. mobile phone, computer, smart TV or set-top-box. Streaming process of Telia Media Services is characterized by:

To play the video content on viewer's device Telia Media Services provides an embed code implemented as HTML iframe and containing a player capable of playing HLS ans MPEG DASH. These and other protocols also can be played back by players supplied by customer. Our player is:

Channels and media assets may be protected to prevent unauthorized usage, to enforce a paid playback, to prevent copyright infringement and to comply with content usage restrictions. Content protection options are: 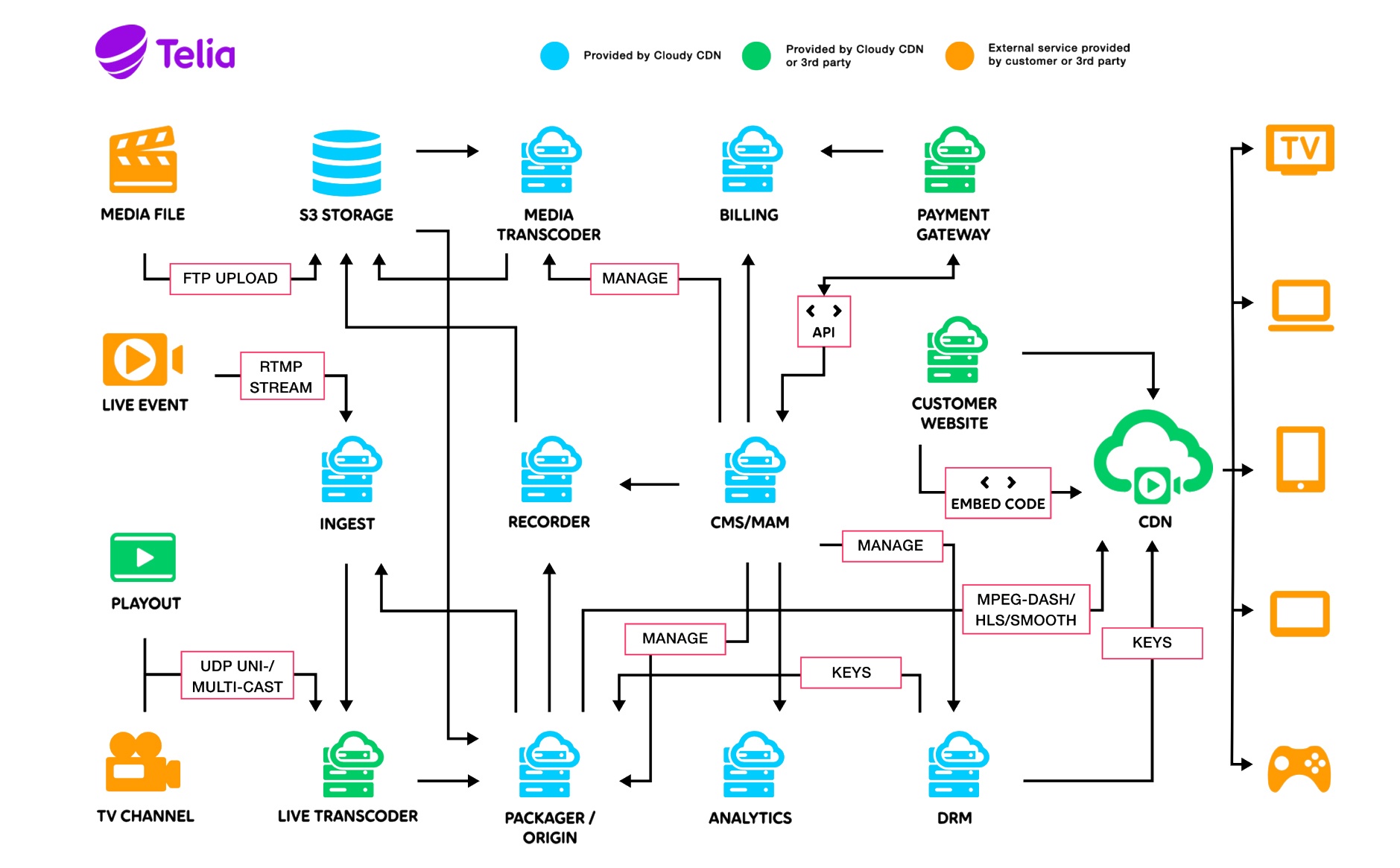